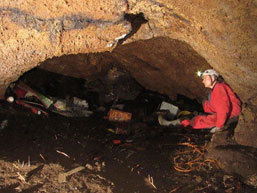 A lava cave under Auckland’s Hebron Christian College’s playing field was recently reopened after being covered over 30 years ago.

The cave starts in the lower corner of the grounds and runs under the lower field. It was reopened up as part of a project to map Auckland’s 200 lava caves.

Local caver Peter Crossley, who was in the cave before it was closed remarked that “the only thing that’s changed is all the rubbish that’s in there”.

The trash, which has since been removed, included old paint tins, soft-drink bottles, wheels of a pram and spouting. It is believed to have been dumped in the cave before it was closed.

The school’s staff and students are excited to explore the cave.