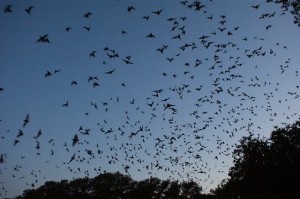 Bracken Bat Cave, home of the world’s largest bat colony and one of the largest concentration of mammals on earth has been opened to the public for the first time.

Each night, many of the 20 million Mexican free-tailed bat that make their summer home in the cave depart to search for insects up to 160 kilometers (100 miles away).

Until now, only members of the nonprofit group Bat Conservation International, who owns the cave and surrounding area, and those specifically invited for VIP tours could watch the bats leaving the cave in the evening or returning in the morning.

The first public viewing took place on Saturday as part of International Bat Night, and 10 more viewings have been scheduled for later this summer and early fall in partnership with neighbouring Natural Bridge Caverns.

For more information and to make reservations for one of the remaining viewings, contact Natural Bridge Caverns at (210) 651‐6101.