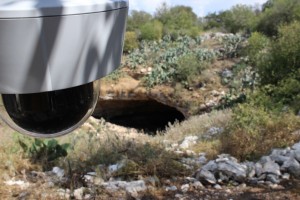 In an effort to bring more exposure to the Bracken Cave Preserve, the home of the world’s largest population of bats, Bat Conservation International has just installed a new webcam.

Located near San Antonio, Texas, Bracken Bat Cave is the summer home to the world’s largest bat colony. Containing millions of Mexican free-tailed bats, the colony is one of the largest concentrations of mammals on the planet.

Earlier this year it was revealed that a San Antonio developer had proposed Crescent Hills, a massive new 1,500-acre, 3,800-home subdivision in southern Comal County, directly next to the Bracken Cave Reserve. Since then, BCI has been working diligently to try and stop the development for fear that it would endanger the bats.

From March to November, the bats’ nightly emergence from the cave takes more than three hours and includes so many bats that they show up on Doppler radar.

Now, with the help of Batcam, anyone can see the amazing spectacle they’re trying to protect via the comfort of their own home. Even better, the Batcam will also allow visitors to watch the bats sunrise return to the cave.

Despite a warning that there are a few outstanding bugs, the camera seemed stable.