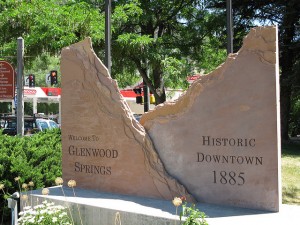 The 2011 National Speleological Society Convention kicked off on Saturday in Glenwood Springs, Colorado. The event, which is expected to draw 1,400 cavers from around the world, began with a 10th anniversary screening of the 2001 IMAX documentary film “Journey Into Amazing Caves” Saturday evening. The cavers featured in the film, Dr. Hazel Barton and Nancy Aulenbach, were on hand after to answer questions after the viewing.

Even before the official opening ceremony took place earlier this morning, the geology presentations had already begun. Taking place primarily at the Glenwood Springs High School, the classrooms seem a fitting place to share knowledge and information.

The small city of Glenwood Springs, with a population of around 9000, couldn’t be happier to have us cavers around. The local newspaper, the Post Independent published a cheerful welcome to all cavers on Friday.

We wish the 1,200 or so speleophiles an enjoyable experience in our community, and we hope a bit of cave magic rubs off on the rest of us. – Post Independent

View the complete schedule and find out more information on the gathering by visiting the official 2011 National Speleological Society Convention website.

For anyone at the convention this week, tell us about it in the comments.