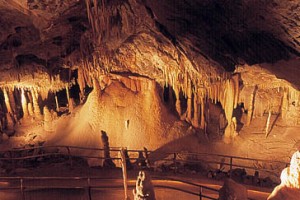 Arizona’s Kartchner Caverns, 70 kilometers (43 miles) south east of Tucson, has been the subject of a five year study to take a look at it’s microbiological residents. The investigation began to try and discover what was causing a coat of slime on fake rock panels used to hide hoses and other maintenance equipment. In the end it was found to be a bacterial community native to the cave, happily feeding on the panels’ acrylic paint.

Further investigation by the University of Arizona team, has found over 2000 different species that make their home in the cavern. A high number given the hostile location with no sunlight and few nutrients.

To identify the bacteria, it has to first be collected. Researches visit sections of the cave that are closed to the public and run sterile cotton swabs along the walls, storing them in tubes of de-ionized water until they return to the lab.

Back at the lab, DNA from the bacteria is extracted and a specific gene is analysed. The gene 16SrRNA, which is found in all bacteria, varies slightly between groups. It is those variations that allow for identification of a sample when compared against a database of bacteria. Many of the samples found in the cave have no match.

Scientists have have used bacteria for everything from medical applications to oil spill cleanups and finding out more about the microbes in Kartchner Caverns could end up in new products, as well as better ways to care for the cave.

Another study going on in Kartchner Caverns is compiling data on fungi within the cavern.

What Lies Beneath [Arizona Public Media]