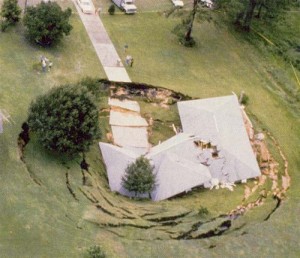 A sinkhole that occurred on June 16th in the Union Academy neighbourhood of Tarpon Springs, Flordia forced one elderly couple, Nathaniel Crawford, 90, and his wife Virginia, 83, from their home and prompted the city to close one of the streets while engineers investigated.

To experts, the sinkhole didn’t come as a big surprise. “In the Tarpon Springs area, each square mile will experience one sinkhole every 20 years.” according to “The Sinkhole Hazard in Pinellas County: A Geologic Summary for Planning Purposes,” a 1991 report from the Florida Sinkhole Research Institute.

After further investigation, the city of Tarpon Springs subsequently closed Dorsett Park after a scan using ground-penetrating radar revealed a slightly depressed in the park at risk of sinkhole collapse.

While manmade conditions can contribute to sinkholes, the problem is the limestone geology of the area. Nearby Lake Tarpon used to drain toward Tarpon Springs through a sinkhole which fed into a deep cavern, however in 1969 Southwest Florida Water Management District constructed a dike around the sinkhole entrance in the lake cutting off the flow.

Sinkholes can be triggered by a number of different causes such as drought, construction, blasting, heavy ground loading, heavy rainfall, and heavy groundwater pumping. In areas such as Tarpon Springs, architects and engineers take into consideration the sinkhole risk when constructing buildings. For instance, buildings can be built with rigid foundations to resist breaking apart in a sinkhole collapse.

As recently as a few months ago, sinkholes developed at two other places near the South Disston Avenue area; beneath the gymnasium at the Tarpon Springs Community Center and on East Curlew Place, a nearby street.