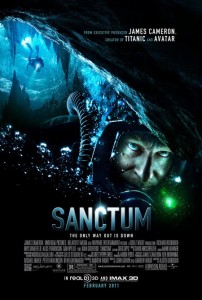 Universal Studios Home Entertainment has announced that the cave diving thriller Sanctum produced by James Cameron will be released on June 7 to Blu-ray 3D, Blu-ray 2D and DVD.

One exciting feature of the release is that it will include Nullarbor Dreaming, the 1989 documentary about a team of cave divers that were trapped after flash flooding blocked the entrance to the cavern they were exploring.