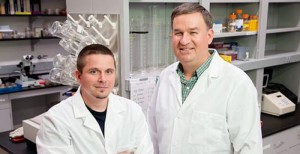 Researchers have found a cave microbe that produces a compound which inhibits Pseudogymnoascus destructans, the fungus that causes white-nose syndrome in bats.

More exciting is that they have been able to isolate C. albicans yeast from the bodies of healthy, cave hibernating bats, suggesting that potential treatments would be unlikely to harm bats or damage cave ecosystems.

We’re looking for a microbe that’s already associated with bats, that lives in the cave environment and is not a problem for people or other cave life. Daniel Raudabaugh, University of Illinois graduate student

C. albicans is a common resident of human intestines and is found in many other species. The yeast uses tt-farnesol for “quorum-sensing” – at high concentrations, the compound inhibits the growth of fungal projections called mycelia, causing Candida to revert from its invasive form to a more benign, yeast-like state. The compound also disrupts the process by which some bacteria form slimy biofilms that aid in their ability to infect and damage other cells.

This chemical is known to inhibit other fungi, so we wanted to see if this would inhibit the fungus that causes white-nose syndrome in bats. Daniel Raudabaugh, University of Illinois graduate student

Testing of different concentrations of tt-farnesol against the white-nose fungus, showed that, at the right concentrations, it effectively inhibited it.

There are Candida species that already produce this concentration of tt-farnesol, which inhibits P. destructans at biologically produced concentrations. Daniel Raudabaugh, University of Illinois graduate student

The next step is to search caves for Candida populations that naturally produce tt-farnesol at high enough concentrations to be effective.

Several million bats have died of white-nose syndrome in the U.S., but European bats appear to survive the infection better. It is possible that the microbial makeup of European caves plays a role in bat survival there. Andrew Miller, Illinois Natural History Survey mycologist

The researchers also discovered that several other Pseudogymnoascus species are less sensitive to tt-farnesol, which suggests the compound could target the white-nose fungus specifically without disrupting other components of the cave ecosystem.

The goal is to preserve as many of the natural species as possible while eradicating P. destructans. That is the hope. And so far, it looks promising. Daniel Raudabaugh, University of Illinois graduate student