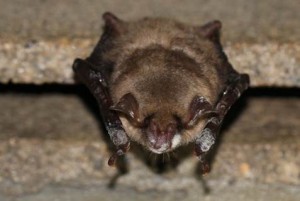 A hibernating Myotis myotis near the city of Greifswald, Germany infected with Pseudogymnoascus destructans. Photo by S.J. Puechmaille

New genetic research provides the strongest evidence yet that Pseudogymnoascus destructans, the fungus that causes White-nose Syndrome in bats, originated in Europe.

In a paper published Monday in Current Biology, a joint team of researchers, made up of scientists from the Royal Veterinary College, the University of Greifswald and University College Dublin, investigated P. destructans’ origins on a molecular level.

This allowed the researchers to compare the genetic similarity between European and North American samples of the fungus and assess whether Europe was a likely source for the recent introduction of the pathogen to North America.

They found a higher diversity of P. destructans within the European population of bats versus North America, demonstrating a long term presence in Europe, and strongly supporting the introduction of the fungus to the eastern region of the USA from Europe.

Given there is no bat migrating between North America and Europe, it is very likely that the fungus has been introduced to North America via anthropogenic activities.

The introduction of new pathogens into native populations represents the undesired consequence of globalisation and the unprecedented movement of humans, animals and other things such as agriculture materials or ballast water. Stefania Leopardi, Royal Veterinary College

Another key factor in suggesting Europe is the origin of P. destructans is that the fungus does not have the same mass mortality effect on European bats as it does in North America. It seems that native European bats have a resistance resulting from co-evolution with the fungal pathogen.

Demonstrating the European origin of the North America population of Pd is a first important step in better understanding factors underlying the emergence of this devastating disease. Our study paves the way for future research to uncover the exact site of origin in Europe, information that would likely shed light into the exact nature of the human activity responsible for the introduction. Dr. Sebastien Puechmaille, University of Greifswald

White-nose syndrome was first detected in New York State in 2006 and estimations put the death toll at more than 5.7 million cave-dwelling bats in the eastern half of North America. To date, bats with WNS have been confirmed in 25 states and five Canadian provinces.