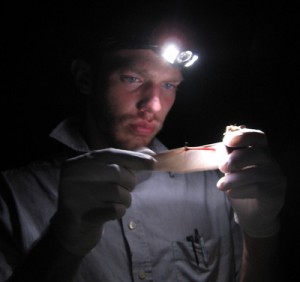 Researcher Joseph Hoyt examines a little brown bat for signs of white-nose syndrome outside a mine in New York. Photo via UC Santa Cruz

Bacteria found naturally on some bats may prove useful in controlling the Pseudogymnoascus destructans, the fungus responsible for white-nose syndrome.

In research, published in the Journal Plos ONE on Wednesday, scientists at the University of California in Santa Cruz, isolated bacteria from the skin of four bat species and tested the isolates for their ability to inhibit the growth of the fungus.

Six bacterial isolates, all in the genus Pseudomonas, showed promise and were tested more extensively. As luck would have it, all six specimens were found to significantly inhibit growth of the fungus, and two isolates performed especially well in suppressing fungal growth for more than 35 days.

What’s promising is that the bacteria that can inhibit the fungus naturally occur on the skin of bats. These bacteria may just be at too low a level to have an effect on the disease, but augmenting them to higher abundances may provide a beneficial effect. Joseph Hoyt, UC Santa Cruz graduate student and lead author

Experiments are now in progress to see if applying the bacteria to bats can protect them from the disease.

We are analyzing data from tests on live bats now, and if the results are positive, the next step would be a small field trial. Joseph Hoyt, UC Santa Cruz graduate student and lead author

The hope is that a bacterial spray applied to bats during hibernation could suppress the fungus enough to help the bats survive the winter.

The potential for a treatment is exciting, because this disease is raging across the country. Marm Kilpatrick, UC Santa Cruz Professor of ecology and evolutionary biology, and coauthor

Curiously, the isolates with the strongest inhibitory properties were cultured from a bat species that has suffered lower mortality from white-nose syndrome than other species. It raises the possibility that naturally occurring bacteria might have something to do with the lower impact of the disease on some species.

This research was funded by grants from the U.S. Fish and Wildlife Service and the National Science Foundation.