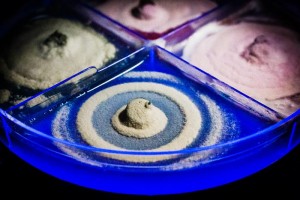 The fungus Ophidiomyces ophiodiicola can infect, and kill, multiple species of snakes. Photo by Brian Stauffer

Recent research shows that a deadly fungal infection afflicting snakes is eerily similar to the fungus that causes white-nose syndrome in bats.

In a new report in the journal Fungal Ecology, scientists found that although Ophidiomyces ophiodiicola (the snake fungus) and Pseudogymnoascus destructans (the bat fungus) inhabit different ecological niches and thrive at different temperature and humidity ranges, the fungi share basic traits that allow them to persist across a range of habitats and infect multiple species.

The fungus killing these snakes is remarkably similar in its basic biology to the fungus that has killed millions of bats. It occurs in the soil, seems to grow on a wide variety of substances, and it possesses many of the same enzymes that make the bat fungus so persistent. Andrew Miller, Illinois Natural History Survey mycologist at the University of Illinois

The snake and bat pathogens both emerged in North America in the mid-2000s, and each is sweeping across the United States and into parts of Canada. Researchers and wildlife officials have struggled to keep up with the wave of infections and find ways to protect the animals.

White-nose syndrome afflicts bats that are hibernating in cool caves, depleting their energy stores and killing more than 90 percent of those infected. Meanwhile, the snake fungal disease is active at higher temperatures.

O. ophiodiicola consumes keratin, a key ingredient in snake scales. It can cause scabs, nodules, abnormal molting, ulcers and other disfiguring changes to snake skin and other tissues. Mortality in infected snakes appears to be 100 percent.

We know that the fungus is out there, we know that it’s killing snakes, but is it killing healthy snakes or is it killing snakes that are already weakened from some other cause? Habitat degradation, pollution, stress from human encroachment and severe weather all may worsen snake health, potentially making snakes more susceptible to disease. Matthew Allender, Illinois comparative biosciences professor 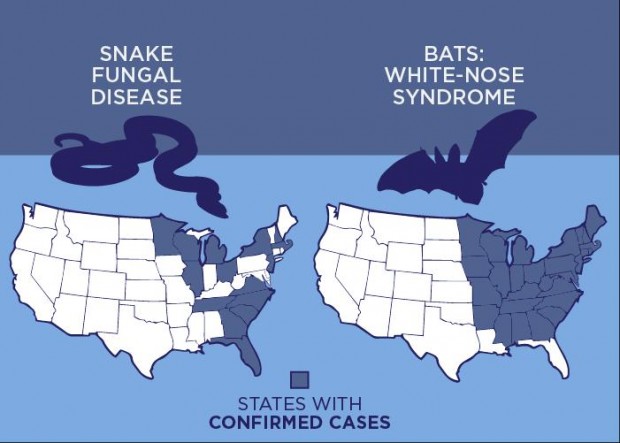 Ophidiomyces ophiodiicola, a fungus that is afflicting snakes across the Midwest and Eastern US, shares many traits with Pseudogymnoascus destructans the fungus that causes white-nose syndrome in bats. Image by Julie McMahon

Ophidiomyces ophiodiicola is an emerging infectious disease. Because it can grow within such a wide range of environmental conditions and is highly virulent, it could be spread to new habitats by the release of infested pet snakes and by the international animal trade, infecting many more species of snakes worldwide. Frank Gleason, Honorary research fellow at the University of Sydney

Both the bat and snake fungi infect a variety of species. Seven species of North American bats have been diagnosed with white-nose syndrome. Other species have tested positive for the fungus, but have not been confirmed to have WNS. Snakes affected by snake fungal disease include northern water snakes, eastern racers, rat snakes, timber rattlesnakes, Eastern massasaugas, pygmy rattlesnakes and garter snakes.

While attention to white-nose syndrome is gaining steam in scientific circles, researchers have been slower to recognize similar emerging diseases in reptiles and amphibians. Matthew Allender, Illinois comparative biosciences professor

To address this and other gaps, the Partners for Amphibian and Reptile Conservation this year formed a national disease reptile and amphibian task team.

This is a collaborative effort among biologists, veterinarians and habitat managers to actually assess the risks and minimize the effects of disease. It started in large part because of efforts, like ours, to understand these emerging diseases. Because as you go out and you gather more and more information, you realize you’re just scraping the surface. Matthew Allender, Illinois comparative biosciences professor