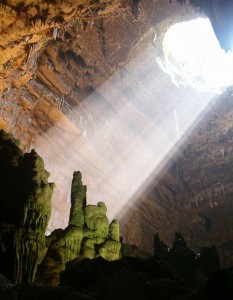 A view of the natural entrance from inside the Grave. Photo by Marcok/Wikipedia

To commemorate the 75th anniversary of the discovery of Italy’s famed Castellana Caves, cavers will be given the opportunity to descend the 60 meter (200 foot) deep natural entrance to the Grave, the main cave of the system.

Now one of the most famous show caves complexes in Italy, the Castellana Caves were first discovered on January 23, 1938 when intrepid explorer Franco Anelli first descended the Grave and discovered the beautiful cave below.

Organized by the Gruppo Puglia Grotte, this special memorial event to recreate that first fateful descent will take place on Sunday, January 27, 2013 at 9:00, and is open to all cavers with proper insurance coverage.