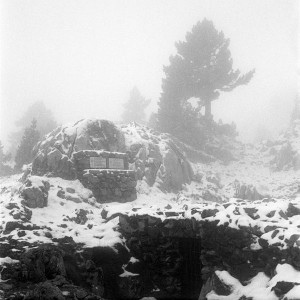 To mark the 60th anniversary of the discovery of the Pierre-Saint-Martin Cave in France, 170 cavers took the opportunity to visit the cave between July 29th and August 7th, following the path of the first explorers back in the 1950’s.

Discovered in 1950 when researchers Georges Lépineux and Giuseppe Occhialini noticed a jackdaw fly out of a small hole in the cliff. Throwing stones down the hole they found that they could not hear the stones hit the bottom, convincing them of the enormity of the abyss.

First descended in 1951, the historic entrance was found to be a gigantic 320m (1050 foot) vertical climb. It is now kept closed, and was opened specifically for the anniversary by the Government of Navarre.

The anniversary trip, which when first explored was equivalent to climbing in the Himalaya’s, was undertaken by cavers ranging in age from 15 to 70 years old, who came from all France, Spain, Belgium and even as far as Japan.