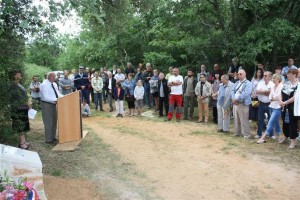 Last weekend a memorial was erected in Labastide de Virac, France for Eric Establie who disappeared during a dive in Dragonnière de Gaud on October 3rd, 2010. Family, friends and rescue workers from Spéléo Secours Français, attended the ceremony.

The massive rescue effort last fall involved over 400 cavers, from caving rescue organizations all over Europe. Nine days after he went missing, his body was located by two Welsh cave divers, 780 metres from the surface, and 70 meters beyond a rock fall that cut him off from the surface.