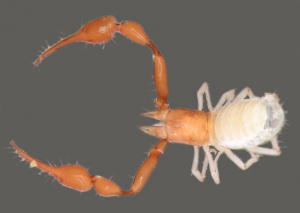 A Dorsal View of Lusoblothrus aenigmaticus. Photo by Sofia Reboleira

A new cave dwelling pseudoscorpion has been discovered by researchers in the Algarve region of southern Portugal.

Found by Dr. Ana Sofia Reboleira in Ibne Ammar cave in karst massif of the Algarve, the pseudoscorpion appears to have no close relatives in all Palearctic region and is being considered a biological relic.

The medium-sized pseudoscorpion’s isolated taxonomic position required the creation of a new genus in order to accommodate the new species. Dubbed Lusoblothrus aenigmaticus, it shows evidence of moderate troglomorphic adaptations such as a lack of eyes.

The discovery was made during visits to several caves in the region in 2009 and 2011, when specimens were collected using pitfall traps, set up just beyond the twilight zone and in the deepest and most thermally isolated parts of the caves, in addition to direct searching during visits to check on the traps.

This exciting find feeds the belief by some researchers that the Algarve region of Portugal is a hotspot for ancient underground fauna.

The paper, entitled Lusoblothrus, a new syarinid pseudoscorpion genus (Arachnida) from Portugal, occupying an isolated position within the Holarctic fauna, was published recently in the journal Zootaxa.