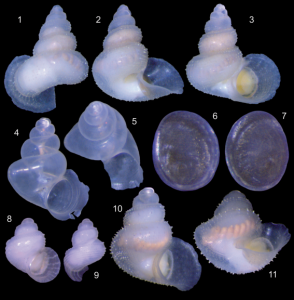 Multiple views of the Spiripockia punctata shell and operculum.

A new genus and species of cave dwelling cavernicolous pomatiopsidae has just been described.

First discovered in 2005 in a cave in Serra do Ramalho, Bahia, Brazil, Spiripockia punctata is characterized by its fragile and translucent shell and other troglobiont adaptations such as depigmentation, lack of eyes and small size.

Besides being important for academic purposes, the description of this species is important as may help in increasing the enviromental protections of the cave it is endemic to, as well as the rest Serra Ramalho Karst area which under threat from economic development.

The paper, A new genus And species of cavernicolous pomatiopsidae, is available in the recent issue of the Papéis Avulsos de Zoologia.