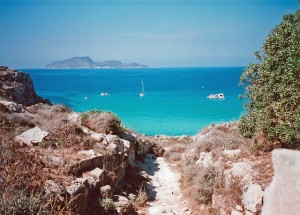 A view of Italy’s Favignana Bay. Photo by Alun Salt/flickr

A team of German researchers studying skeletal remains from an island cave in Favignana, Italy have discovered that early humans ate little seafood, despite living on the Mediterranean sea.

The research, published November 28 in the open access journal PLOS ONE, revealed, through the analysis of the chemical composition of bones discovered in caves on the Egadi islands, that the early settlers continued hunting land animals, rather than looking to the sea for alternative sources for meat.

These findings have crucial implications for studies of the role of seafood in the diet of Mediterranean hunter-gatherers. Marcello Mannino, Max Planck Institute for Evolutionary Anthropology, Germany

Further genetic analysis of the bones has found that modern humans first reached the area 19,000 – 26,500 years ago, at the peak of the last ice age, when sea levels were low enough to expose a land bridge between the islands and the Italian peninsula.