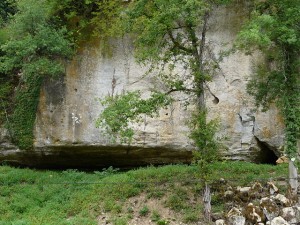 An international team of scientists have recently discovered some of earliest known art in a rock shelter near the France’s famous Chauvet Cave.

On a 1.5 metric ton (3000+ pound) block of limestone that is believed to be the collapsed ceiling of the shelter, a number of zoomorphic and geometric engravings are visible along with images of female sexual organs.

Radiocarbon dating of the engravings indicate them to be some 37,000 years old, making them slightly older than the paintings inside the nearby cave.

The site, known as Abri Castanet, has yielded many discoveries during an archeological excavation that has been ongoing for the past 15 years. There have been many findings including pierced animal teeth, pierced shells, ivory and soapstone beads, engravings, and paintings on limestone slabs.

Unlike the Chauvet paintings and engravings, which are deep underground and away from living areas, the engravings and paintings at Castanet are directly associated with everyday life, given their proximity to tools, fireplaces, bone and antler tool production, and ornament workshops, Randall White, Anthropology Professor at New York University

The research has been published in the latest issue of the journal Proceedings of the National Academy of Sciences.