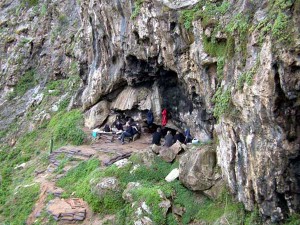 The bright red powder, the dried remains of a primitive paint, was made by combining a redish clay called ochre, crushed seal bones, charcoal, quartzite chips, and a liquid, likely water.

Blombos Cave, which sits 35 meters (114 feet) up the side of a cliff on the southern tip of Africa, shows evidence that is has been inhabited off and on by humans for at least 140,000 years. Although the “studio” is only 100,000 years old, it predates the previous oldest workshop by 40,000 years.