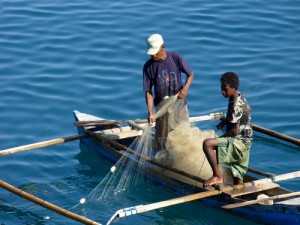 Scientists from the Australian National University have uncovered the earliest evidence of humans participating in deep sea fishing during an excavation of a small one square metre test pit in Jerimalai, a cave in East Timor.

The new findings, which date back around 42,000 years, include almost 39,000 fish bones of some 23 species of fish, including tuna, unicornfish, parrotfish, trevallies, triggerfish, snappers, emperors and groupers.

Along with the bones, researchers found three hooks, apparently made from the shells from a sea snail called Trochus. These hooks could have accounted for the bones of the deepwater, fast-moving tuna fish which take considerable skill to catch.

Until now, the oldest evidence of deep sea fishing was 12,000 years ago.

It is believed that the fishermen had lived in the limestone cave, which is located about 50 metres (165 feet) above sea level and 300 metres (985 feet) from the coast on the eastern end of East Timor.