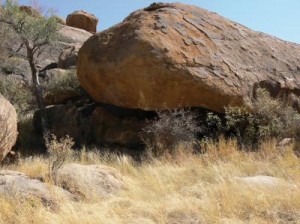 Photo via PLOS One

Researchers investigating remains found at Leopard Cave in Namibia have discovered evidence of the earliest known instance of domesticated sheep or goats in southern Africa.

The finds, two teeth, are believed to be from domestic sheep, although they were too worn to make a definitive distinction between sheep or goats. Dated to between 2,042 and 2,312 years ago, this makes them the earliest known domesticated animals in sub-Saharan Africa.

The full article, entitled “Of Sheep and Men”: Earliest Direct Evidence of Caprine Domestication in Southern Africa at Leopard Cave is available in the open journal PLoS ONE.