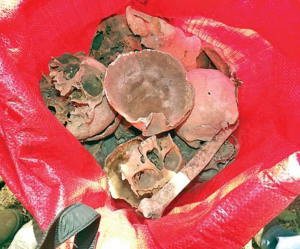 When remains were found in a southern Mexican cave last month, the first thought of officials was that they had discovered yet another mass grave.

With the increasing violence of the country’s drug war, mass graves have become more and more common in Mexico.

As it turns out, the skeletal remains 167 people found in that cave were not a mass grave, but a pre-Columbian bone deposit.

Unfortunately by the time it was realized and the Mexican National Institute of Anthropology and History was called in, the bones had already been removed from the site and much of the ancient archaeological evidence was destroyed.

What now troubles anthropologists is the apparent lack of respect and care the site was given, even if it was a mass grave.

According to forensic anthropologist William Haglund, who has led mass grave investigations for the United Nations and Physicians for Human Rights, the authorities in Chiapas failed to adhere to the standard protocols for crime scene investigations involving skeletal remains.

Instead of taking several days as most crime scene investigations would, state police and soldiers took only 15 hours to empty the cave of its remains.

Once you’ve changed the context, it’s gone, it’s destroyed. And that’s what they’ve done, they’ve completely destroyed that site. They’ve raped it. To me, all of that bone that they’ve recovered is of negligible value without the context. James Brady, Archaeologist at California State University

Local media video and photos from the site show authorities raking up bones with a hoe and stuffing them into large bags. The remains now show tell-tale signs of reckless handling such as freshly broken bones.

We haven’t had a cave with this many burials in that area before. And so to have something of this magnitude utterly destroyed is just awful, James Brady, Archaeologist at California State University