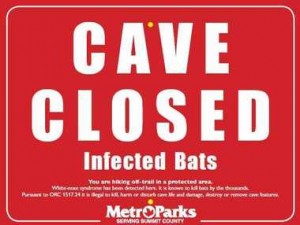 White nose syndrome has been confirmed in bats hibernating in the caves and ledges of Liberty Park in Twinsburg, Ohio.

During a weekly inspection of the caves and ledges that occurred in mid January, biologists discovered a dead little brown bat outside one of the park’s off-trail caves and collected it. Subsequent tests by researchers at the Southeastern Cooperative Wildlife Disease Study in Athens, Georgia were able to confirm that the specimen was positive for WNS.

On visits since the discovery, biologists have noticed bats that should still be hibernating congregating near the entrance of the cave, suggesting that they may be infected as well.

Home to various species of bats such as the little brown, big brown, northern long-eared, red, hoary, silver-haired and tri-colored, the caves are see a lot of traffic from off-trail hikers from the surrounding subdivisions who disobey the rules and enter them. There is concern that these hikers may be inadvertently contributing to the spread of the disease.