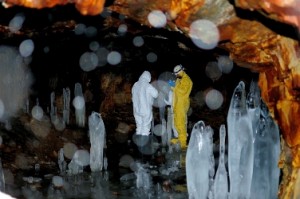 The Maine Department of Inland Fisheries and Wildlife has received confirmation that white-nose syndrome is now in the State. While conducting surveys for WNS this spring, bats at two sites in Oxford County displayed visible signs of white-nose syndrome on their wings and muzzles. Carcasses from one of the sites were collected and sent to the U.S. Geological Survey-National Wildlife Health Center in Madison, Wisconsin where the confirmation was made.

With Maine, the final New England state to be added, the list of locations infected with the disease now totals 17 U.S. states and four Canadian provinces.

Bat Disease, White-Nose Syndrome, Confirmed in Maine; Not Harmful to Humans, but Deadly to Bats [Maine Department of Inland Fisheries and Wildlife]