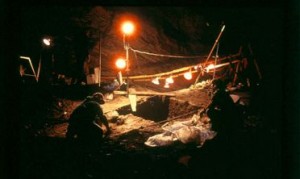 An international team of scientists is beginning its second field season of research at Wyoming’s Natural Trap Cave, which has previously yielded prehistoric fossils.

Located in the flanks of Wyoming’s northern Bighorn Mountains, the 26-meter (85-foot) deep pit became an internationally renowned site due to its discreet entrance which often went unnoticed by animals traveling through the area. The unsuspecting animals fell in and have been well-preserved in the sediments at the bottom of the cave.

First investigated in the 1970’s, the cave was kept closed for almost thirty years until excavations returned in 2014 as part of a paleontological, genetic and paleoclimatological research project.

Now researchers from Des Moines University in Iowa and other academic institutions in California, Georgia, Iowa, New York, Tennessee, Washington, Wyoming and Australia have returned to continue excavations from mid-July through early August.

By running a battery of tests, including radiocarbon dating and DNA analysis on the samples of the bones and teeth recovered, scientists hope to construct both a picture of how Ice Age animal populations adapted and responded to climate change, as well as an analysis of major extinction events.

As this cave is a highly sensitive location, access to the cave will be limited during the excavations to the project principals and members of their crew with specific training. After field work is complete, the cave and work areas will be recontoured and restored.