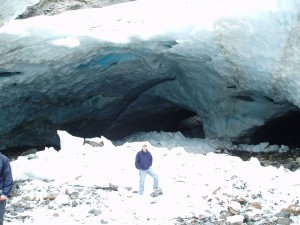 The collapse of a popular ice cave in northwest Washington has claimed the life of one person and injured four others.

CNN reports that the group had been visiting the Big Four Ice Caves in the Mount Baker-Snoqualmie National Forest on Monday when the incident occurred.

A cool destination for hikers, the caves routinely form in snow and ice deposited by avalanches on Big Four Mountain during winter and spring. However, hot weather can make the caves unstable and prone to collapse.

It’s not illegal to go in the caves. However, we’ve been saying since mid-May, it’s extremely dangerous with all this hot weather. Shari Ireton, Snohomish County Sheriff’s Office

Monday’s collapse resulted in three people being airlifted to a Seattle trauma center. With injuries ranging from cuts and scrapes to broken bones, the patients include a 25-year-old man in critical condition, a seriously injured 35-year-old man and a 35-year-old woman in satisfactory condition who was released later in the evening.

The fourth person, a girl, was sent to a hospital in Everett, Washington with minor injuries.

Meanwhile rescuers have yet to recover the body of the deceased individual amid dangerous conditions.

Because conditions of the ice are so dangerous at this point, teams from Everett Mountain rescue and other search and rescue volunteers are looking at conditions to see how safe it is before they go in. Shari Ireton, Snohomish County Sheriff’s Office

Unlike the collapse of a shelf of the cave that was captured on film on the previous day, Mondays event is described a much more catastrophic event.

There was a large pile of ice and rock that came down, so it wasn’t just one big slab… it wasn’t a piece of a shelf coming off. Shari Ireton, Snohomish County Sheriff’s Office

Latest reports indicate that the conditions of the 25 and 35-year-old men have both been upgraded, with the 25-year-old now listed as serious and the 35-year-old as satisfactory condition.