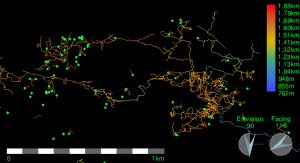 For the second time this month, a new version of Survex, an open source cave-surveying software package, has been released.

This new version, 1.2.19, adds further improvement to the Mac OS X edition, adds support for exporting .pos from aven, and improves the footer on printouts.

The release also fixes a bug with aven’s export to GPX, KML and HPGL, which was introduced in the previous release.

Developed by cavers Olly Betts and Wookey, Survex is capable of processing cave survey data from extremely complex caves very quickly. It is licensed under the GPLand is can be run on a variety of platforms such as Windows, Mac and Linux.