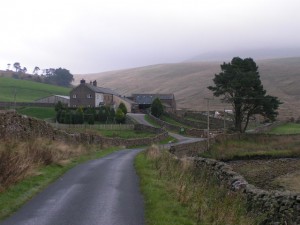 A sheep farm at the top of Kingsdale. Photo by Dave Dunford/Wikimedia

An inquest into the death a caver killed by a falling rock in England’s Bull Pot earlier this year has determined the incident an accident.

The Craven Herald reports that although the reason for the rock fall in Bull Pot remains a mystery, coroner Rob Turnbull concluded that experienced caver Gorden Aitken, 50, died as a result of an accident.

Aitken had completed three pitches down into the cave with Yorkshire Subterranean Society member Shahrzad Mohamadi on February 12th, when he went off to explore a passage. She told the inquest how she heard Aitken crawling on pebbles just before a thud.

I had stopped to take a drink when I heard a noise—like something huge had fallen. I shouted ‘Gordon, are you OK’ but I heard nothing. I knew something terrible had happened. Shahrzad Mohamadi, Yorkshire Subterranean Society

Upon entering the passage, she saw Aitken on the floor with a rock on top of him. She immediately checked to see if he was breathing, but was found not to be.

Also testifying was Cave Rescue Organisation member Martin Colledge who described finding how he found Aitken when he arrived on the scene.

His back was sloping away and there was a large flake of rock on his back and head. Martin Colledge, Cave Rescue Organisation

With the rock to heavy to move, it was broken up and removed piece by piece before Aitken’s body was stretchered out of the cave and pronounced dead by a doctor at the cave entrance.

A minor tremor days before the incident was investigated as a possible cause but an expert at the British Geological Society felt it would have been to small to have caused the rock fall.

Located near Kingsdale in Yorkshire, Bull Pot is a popular vertical cave.

[via The Craven Herald]