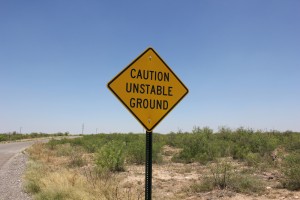 A young horse is safe after falling in a sinkhole during the night in a pasture in Kentucky’s Fayette County.

The Lexington Herald-Leader reports that workers at the farm had been searching the large pasture for the missing yearling colt on Saturday when they discovered a fresh sinkhole, 5 feet (1.5 meters) deep and about 8 feet (2.25 meters) across. To their surprise the animal was inside.

They estimated that it has been trapped for four to six hours.

With assistance from Veterinarians from Hagyard Equine Medical Institute who are experienced in large animal rescue and local fire departments, a rescue was mounted.

Crews dug a second hole next to the sinkhole and then made a gentle ramp into the sinkhole. When they could get close enough they anesthetized the horse, secured a fire hose around its torso and carefully dragged him up the ramp.

The dehydrated, but otherwise healthy, colt was given fluids and is now recovering from the ordeal at the Hagyard animal hospital.

[via The Lexington Herald-Leader]