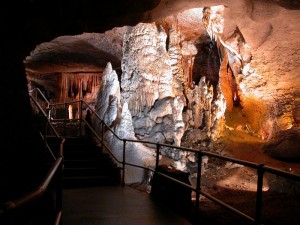 Inside the Blanchard Springs Caverns’ Ghost Room. Photo via USFS

Some questionable loose rocks have prompted the Forest Service to reroute the tours at Arkansas’ Blanchard Springs Caverns.

The Arkansas Times reports that during a routine inspection, it was determined that two areas in the ceiling of the popular Ozark-St. Francis National Forests destination are potential safety hazards.

One section, part of the wild cave tour, was able to be rerouted with little impact to visitors, however the other section causes more of a problem.

Located in the man-made tunnel between where visitors exit the elevator and enter the cave, a large questionable rock has effectively shut down the elevator access to the cave.

Until safety can be reviewed and fix determined, the park has set up a bus to take visitors to the exit of the cave where they will now both begin and depart a new temporary route tour. The new route has been developed to be about the same length and retain the same “educational and inspirational characteristics” of the Dripstone Trail.

Mining experts will be in the cave this week to look at the issues we’ve identified and help us develop a plan of action, if one is needed. It’s important to us to be able to get these tours back to normal, but we won’t compromise safety. Jim McCoy, U.S. Forest Service District Ranger

[via The Arkansas Times]