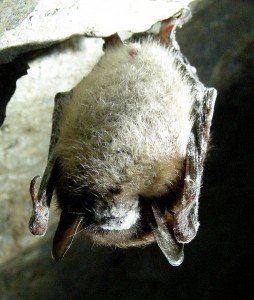 A Little Brown Bat with white-nose syndrome in a Vermont cave. Photo via USFWS

Maine’s Department of Inland Fisheries & Wildlife has submitted a bill that would see two bat species added to the state’s endangered species list.

Maine Public Broadcasting reports that the bill, submitted on Tuesday, seeks to add the northern long-eared bat and little brown bat to the endangered list.

Both species have been hit hard by white-nose syndrome, experiencing declines of nearly 90 percent since the devastating disease spread to the state in 2011.

A third bat species, the eastern small-footed bat, is also being proposed for the state’s threatened species list.

Besides bats, the bill proposes adding a few invertebrate species to the endangered list and change the statuses of some invertebrates and birds.

A public hearing on the bill is expected in about four weeks.