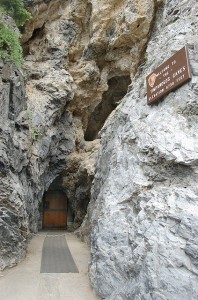 Timpanogos Cave National Monument reports that “someone cut the lock on the cave trail gate, broke into the locked storage room near the cave entrance, and stole a pack containing technical rescue equipment.” The destructive group also damaged windows and left graffiti in the historic the Last Chance restroom.

Thankfully the group did not gain access to the cave itself.

With the caves, cave trail, and visitor center closed for the season, the National Monument in American Fork Canyon is normally pretty quiet this time of year.

If you happened to be in the canyon late on Thursday and saw anything suspicious, or if you hear anything of interest in this case, Monument staff request that you call the National Park Service Tip Line at 888-653-0009.