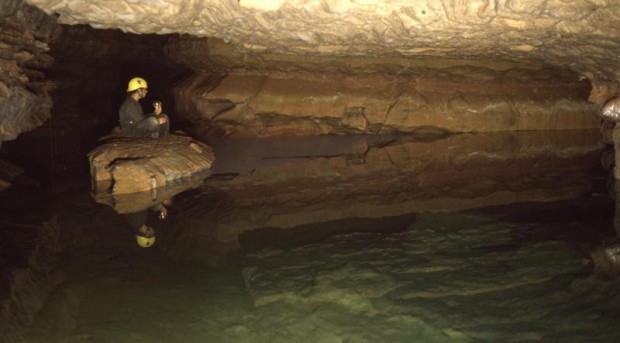 Officials are worried that a new well being proposed near Pringle, South Dakota could drain the lakes in Wind Cave.

Keloland Television reports that a Fundamentalist Church of Jesus Christ of Latter Day Saints compound has applied for a permit that would triple their groundwater usage.

What concerns us about this permit application is the permit calls to withdrawal instantaneously 300 gallons of water per minute 24 hours a day, all year long. And that’s just a ton of water. Tom Farrell, Wind Cave National Park Chief of Interpretation

The lakes occur at the deepest point in Wind Cave, some 654 feet (199 meters) below the highest point in the cave, where the cave intersects the Madison aquifer.

Despite an initial review by South Dakota water scientists who suggested the proposed well wouldn’t negatively affect the aquifer, NPS staff fear the level of the aquifer will drop enough that the lakes would dry up all together.

Besides the concerns at Wind Cave, local residents and the Black Hills National Forest are also oppose the permit.

The Forest Service is worried about the future of Cascade Springs, the largest single springs in the Black Hills. Located just south of the town of Hot Springs, the spring area is home to four sensitive and unique plant species. Cascade Springs also is the source Cascade Creek which tumbles over picturesque Cascade Falls, where the Forest Service operates a public-use area.

Cascade Springs are a very unique series of artesian springs where we were concerned about draw down of this much pumping water from the Madison aquifer and the draw down to those springs, four sensitive and unique plant species that occupy that area, as well as the downstream effects into the Cheyenne River. Craig Bobzien, Black Hills National Forest Supervisor

A South Dakota Department of Environment and Natural Resources hearing on the issue is pending.