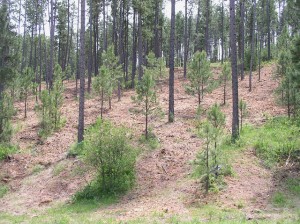 The Forest of the Black Hills of South Dakota. Photo by NRCS SD/flickr

Officials with the South Dakota Game Fish and Parks would like a Forest Service road in the Black Hills to stay closed in the winter so that bats hibernating in a cave along side it won’t be disturbed.

A private landowner is looking for an easement to allow year-round motorized access to his parcel of land which is entirely surrounded by National Forest System lands. Because the 40-acre tract is encircled, the Forest Service is required to provide the landowner access.

Unfortunately the forest road that goes there, currently closed to motorized traffic in the wintertime to support wildlife habitat in the area, passes within 30 meters (100 feet) from Erskine Cave, which is known to contain up to seven different species of bats.

Despite its already limited access, the cave has had a long history of partying, vandalism and dumping of trash, which resulted in a bat gate being installed in 2003. It is expected that a decision to open access to the cave year-round will result in even greater disturbance than the cave has experienced previously.

Game Fish and Parks believes that other forest roads in the area could be used to allow access without disturbing bats, and have requested to visit the site with Forest Service personnel to examine the area.