A population of velvet worms (Onychophora), have been discovered inhabiting a lava tube cave on the island of Santa Cruz, Galápagos.

The creatures were found during mapping and exploration of the lava tube, known as Kübler cave, which was discovered when road work on a nearby highway caused the caused a section of the roof to collapse.

Considered living fossils, velvet worms are most commonly found in tropical regions of the Southern Hemisphere. Of the approximately 180 species, only two are considered true troglobites.

During the study, published recently in the journal Subterranean Biology, researchers found that although the specific species of these specimens is yet to be determined, their 16S rRNA sequence showed no differences to other unidentified velvet worms located on the surface. This, along with their apparent large population in the cave, suggests that the cave dwelling velvet worms are troglophilic—in that they may complete their life cycle in a cave, but they can also survive in above ground habitats. 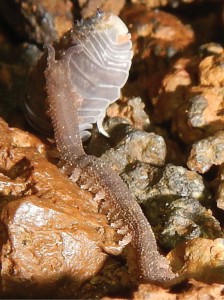 Furthermore, their dark pigmentation, working eyes, and no apparent cave adaptions prevents these specimens from being classified as troglobites.

The next step is to determine the specific species of these creatures. So far, the 16S rRNA data suggests that the Galápagos velvet worms have an Ecuadorian/Colombian ancestry.

Located within the city limits of Puerto Ayora, the largest city on the island of Santa Cruz, Kübler cave is below an area that is currently being developed. It is 914 meters (2998 feet) long and 70 meters (229 feet) deep.