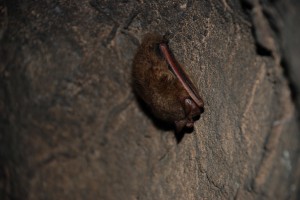 Swabs taken from two Eastern Pipistrelles bats (Perimyotis subflavus) from a single cave—which Wisconsin DNR were quick to point out was not the popular show cave located in the Dane County, Cave of the Mounds—in November 2014, tested positive for the fungus. These finds represents both a new county and a new bat species infected with the fungus in Wisconsin.

White-nose syndrome was first detected in Wisconsin in a Grant County mine in March of 2014, when results from visual inspection and genetic and tissue tests showed that 2 percent of bats in the single site had the disease.

Despite the detection of the fungus at the Dane County cave, there are currently no signs of white-nose syndrome.

The upper Midwestern states, including Wisconsin, are the last remaining stronghold for the hibernating bats that are susceptible to white-nose syndrome. While researchers continue to work to find an effective treatment for the disease, it is critical that we do all we can to slow the spread of the fungus. Owen Boyle, Wisconsin DNR Species Management Section Chief

In an effort to control potential human-assisted transmission of the fungus, strict decontamination protocols and screening of commercial cave and mine visitors remain in place.

Bat surveillance crews will return to the cave in March to look for signs of white-nose syndrome and final results of this season’s surveillance and monitoring are expected later this spring.