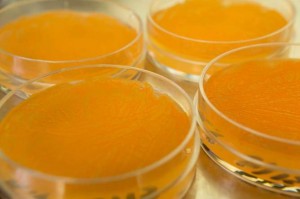 Researchers looking to microbes and naturally-occurring anti-fungal volatile organic compounds (VOCs) are hopeful that the new ammunition will help in the battle to save North American bats from white-nose syndrome.

The team at Georgia State University’s Crow Lab had an idea to harness the natural competition between bacteria and fungi as a way to exert a negative effect on the Pseudogymnoascus destructans, the fungus responsible for causing white-nose syndrome in bats.

As a result of their research, they have found a soil-associated bacterium, Rhodococcus rhodochrous, that has a tremendous effect on P. destructans. Even more exciting is that, in the lab anyway, R. rhodochrous doesn’t appear to need to touch the fungus or the bats in order to prevent or reduce WNS.

To determine potential application methods and its viability in the field, the team is now conducting trials at hibernacula in Missouri and Kentucky. These hibernaculua were specifically chosen to reflect different points in the disease cycle, with the site in Missouri only two years after introduction, while the others in Kentucky have experienced long-term declines.

Despite the positive initial results, the researchers caution that tools we develop will never be enough and that bats themselves must eventually adapt to P. destructans, a new part of the North American biosphere.