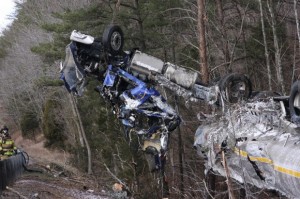 The remains of a tanker that crashed recently, spilling its load of gasoline into a Kentucky cave. Photo via Kentucky Department of Environmental Protection

Early on the morning of January 30th 2014, a gasoline tanker truck left the pavement of US Highway 27 and rolled down an embankment just south of Burnside in southern Pulaski County.

Due to a considerable delay between the time of the accident and when it was finally reported, most if not all 31,000 liters (8,200 gallons) of gasoline had already leaked out of the tanker by the time emergency personnel arrived on the scene.

The fuel had flowed overland to a gully and several hundred feet over frozen ground to a swallow hole, believed to be connected to the Sloan’s Valley Cave system.

Efforts to clean up the fuel remaining on the surface are underway, but the majority is thought to now be in the cave and groundwater.

Although six cave entrances were checked and no fumes were detected, dangerous conditions inside the cave could exist inside. Several sumps exist along the base level stream passage and the gasoline is expected to be trapped on top of the water for a significant period of time.

Fuel vapors may make self-contained breathing apparatus a necessity to enter the cave and there is also the potential for an explosion.

Signs have been posted at the entrances warning of the potential hazardous conditions.

In the future, before caving in Sloan’s or Neely’s Creek please obtain the latest information from the Kentucky Division of Water.

For more information contact the Environmental Response Team at 800-928-2380.