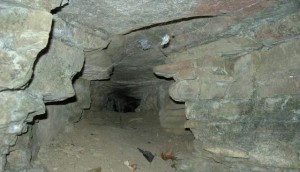 Plans to build a coal ash landfill in Kentucky are on hold after a cave was discovered at the site.

Louisville Gas and Electric is seeking a permit to build a 218-acre coal ash landfill near its Trimble County Power Station in northern Kentucky to facilitate the move away from its ash storage ponds that are at capacity along the Ohio River.

The Kentucky Division of Waste Management has not granted the permit because of concerns about Wentworth Cave that sits on the property, which they believe is protected by Kentucky’s 1988 cave protection law.

In a response to the state’s concerns, LG&E stated that the cave isn’t actually a cave, but merely a “cave-like structure.”

Investigations by officials from the the Division of Waste Management have visited the cave and recorded flowing water in the cave beyond the point where the passage narrowed to a tight squeeze.

Now the Division of Waste Management has asked LG&E in a recent letter to hire a professional geologist and a member of the National Speleological Society and/or the Kentucky Speleological Survey to map and classify the cave.

We’re very concerned about the transport of contaminants through the groundwater. So we would need to know how water flows under this feature and if that can be addressed. For example, if they really can eliminate it, then that’s a problem that can be overcome. To make that determination, they really have to find the water, where it’s coming from and where it’s going. Ron Gruzesky, Manager of the Kentucky Solid Waste Division

A spokesman for LG&E says the company still does not believe the cave is protected. LG&E has until November 15th to have the cave surveyed and respond to the state’s concerns.