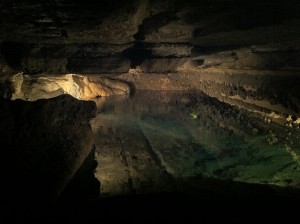 Better known as Bill, Morrissey was a former Minnesota state park director who worked tirelessly during the arduous process to add the cave to the state park some twenty-five years ago. He died in 2011 after a battle with cancer.

Bill recognized that the cave had to be preserved. He established the first cave specialist because he understood that there was cave science, that it needed management, lighting, reestablishing floor grades, and sustainability. For Bill, seeing the protection and management of the cave was very important. And in 2004, we finished this beautiful building – he thought it was important to tell the story about how important and fragile it is. Mark White, Forestville-Mystery Cave State Park Manager

As part of the re-dedication event, new exhibits including photos of Morrissey and his beloved cave and a bag of “caving food,” Cheetos have been unveiled in the newly re-titled William H. Morrissey Visitor Center.