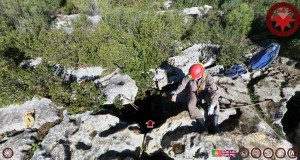 To help raise awareness of a threatened cave, Portuguese cavers have created a virtual tour.

However, despite being in the park, the cave is surrounded by quarries. Cavers are concerned that those quarries could soon destroy the cave if they are not stopped.

Unfortunately due to its 71 meter (233 foot) deep vertical entrance, access to Algar das Gralhas VII is limited to only cavers and the rest of the world is not aware of the beauty inside.

In order to increase its visibility, members of CEAE-LPN with the participation of four other caving clubs: GEM, AESDA, NEL and AES, worked to create a virtual tour.

Working between December 2012 and June 2013, teams carried out photography, topography, exploration and geology trips in the cave to record all the data necessary to bring the cave to light.

Their efforts netted the teams wins in both the ‘Interactive Presentation’ and ‘Best of show’ awards in the Cartography Salon at the recent 16th International Congress of Speleology held this summer in the Czech Republic.