Monday morning at the 2013 NSS Convention in Shippensburg, Pennsylvania was bright and sunny—simply perfect weather, and it was a bright and sunny day for the NSS as well. Convention Chairman, Gordon Birkhimer, donned his Confederate Colonel regalia and with the help of Shippensburg Mayor, Bruce Hockersmith, declared the 2013 Convention to officially begin.

Shortly thereafter, the President of the National Speleological Foundation, Roger McClure, took the podium and formally announced that the Foundation is donating $110,000 to the NSS Headquarters Fund: $55,000 would be donated in exchange for the naming rights to the NSS Library (to be called the Russell Gurnee Memorial Library), and a $55,000 membership challenge, where the NSF will match donations up to $55,000. Word has it that by Monday evening, the NSS had already achieved $30,000 of that amount! 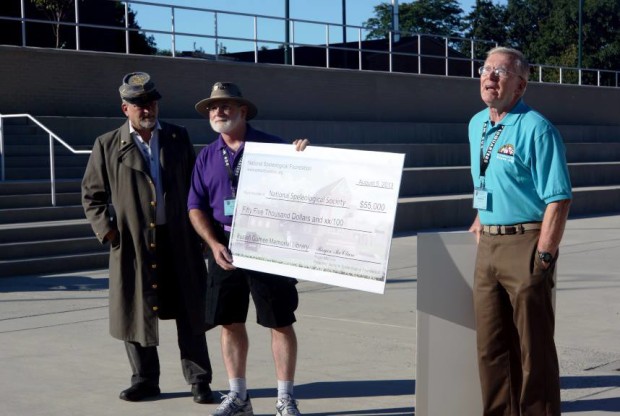 Opening Ceremony of the 2013 NSS Convention, and the announcement of $110,000 in donations by the National Speleological Foundation. Photo by Dean Wiseman 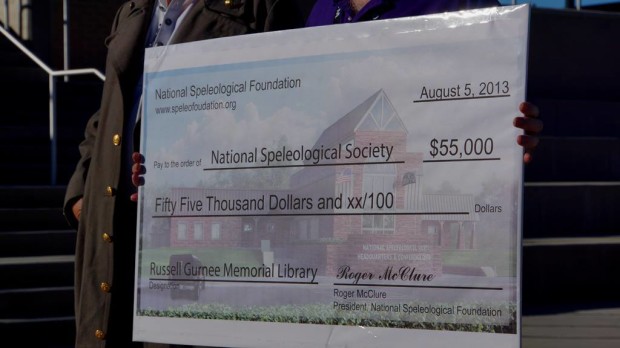 $55,000 from the National Speleological Foundation for the naming rights to the NSS Library at the new Headquarters Facility. The Library will be known as “The Russell Gurnee Memorial Library.” Photo by Dean Wiseman

Monday also saw the opening plenary sessions of the Geology & Geography Section, Communications & Electronics, and the Digging Section. These sessions are a wonderful opportunity for scientists and explorers to share what they’ve learned and discovered. 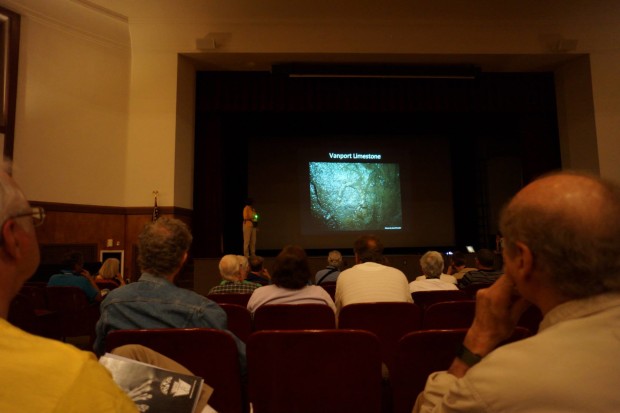 Katherine Schmid kicks off the Geology and Geography Session with her talk about Pennsylvania’s longest mapped cave. Photo by Lee Boop

Meanwhile the opening NSS board of directors session began, with the primary business of electing people to serve as Administrative Vice President (AVP), Operational Vice President (OVP), and Executive Vice President (EVP). The Board elected to retain incumbents Geary Schindel and Dave Luckins as AVP and OVP, and selected Curt Harler to take the seat of EVP Bob Vandeventer, who is stepping down this year. 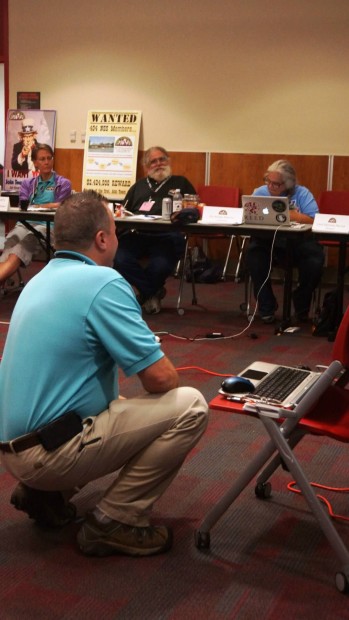 Headquarters update at the Board of Directors Meeting. Photo by Dean Wiseman

Also announced at the Board Meeting, HQ Commission Chairman, Dave Haun, announced that a new roof had been installed on the NSS Headquarters Facility, and that internal remodeling is moving forward on schedule.

Opening Day is also the day for the start of the Speleolympics, the Vertical Section rope contests—we’ll plan to update you on any particularly outstanding performances in upcoming posts. 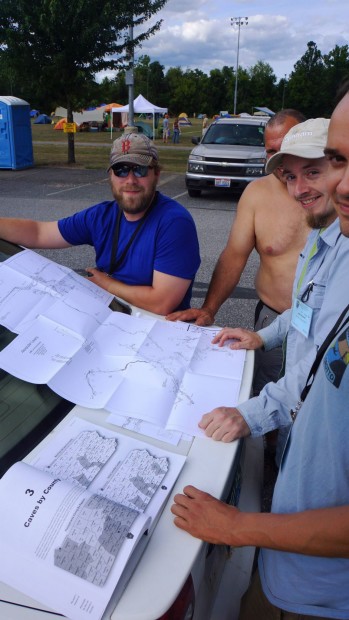 Cavers from New England plan their next adventure. Photo by Dean Wiseman

The Salons are now in their full splendor, as today is judging day for many of them. Of note are some HUGE new cave maps of some world-famous caves, such as Fort Stanton Cave (which boasts having the most remote cave passage on earth at over 11 linear miles from a known entrance), and Deer Cave in Malaysia’s Gunung Mulu National Park, which features a main passage averaging over 150 meters wide and 120 meters tall, large enough that one could theoretically fly a 747 through it!

Last, but certainly not least, Monday at Convention means the Howdy Party. In addition to a buffet-style dinner featuring traditional Pennsylvanian dishes, a fine selection of local beers was available (in addition to wine and non-alcoholic beverages, as well). Later on, the band “Hucklebuck” began their performance for the evening’s entertainment. This band is well-known in Old Timer’s Reunion circles and is comprised of cavers from Maryland and West Virginia. Great party! 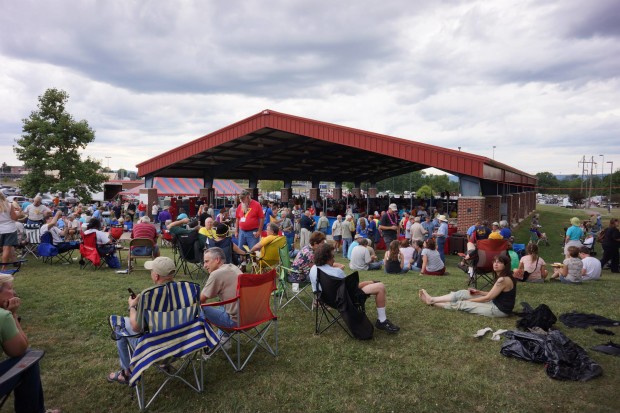 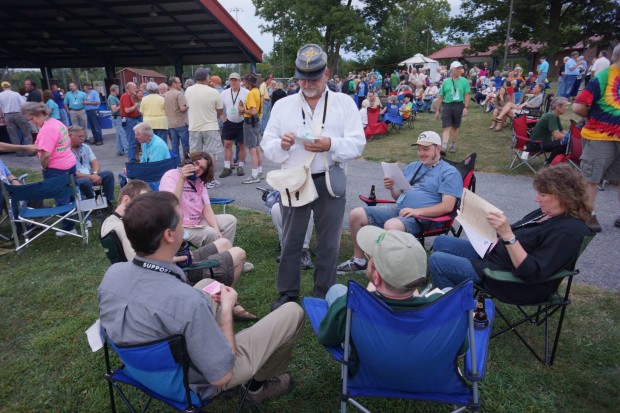 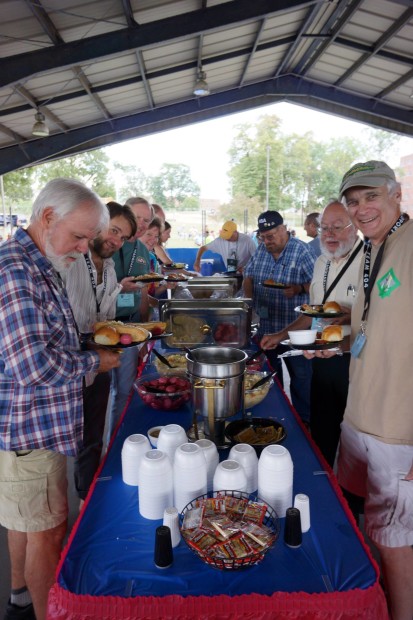 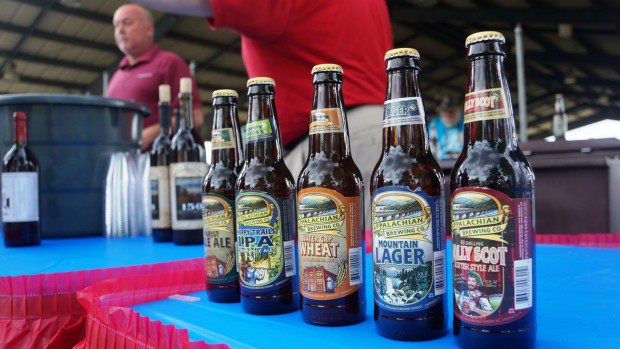 Tuesday brings the promise of more caving, and more cave-related fun. Hope to see you there!