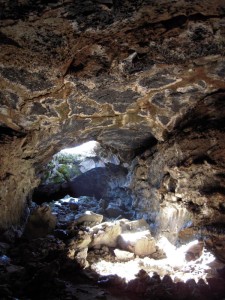 Thirteen students, made up of National Park Service staff, personnel from neighboring agencies, and members of local caving clubs and search and rescue teams, learned vertical rope skills, patient packaging, communication and search procedures, as well as how to transport an injured person through a variety of cave environments.

Instructors from the National Cave Rescue Commission, a section of the National Speleological Society, donated substantial time and effort to put on the eight-day course which eventually culminated in a 12-hour mock rescue to help four “patients” in two separate caves.

The complicated logistics, along with physical demands of performing cave rescue procedures for a lost or injured patient, instilled a strong value for safe caving practices among students and instructors.

Every year Lava Beds National Monument welcomes more than 130,000 visitors. Of those, it is estimated that over 80% venture underground to enjoy the many lava tubes. All those visitors, in addition to a steady stream of researchers and staff, exploring some potentially challenging caves leave plenty of opportunities for mishaps.