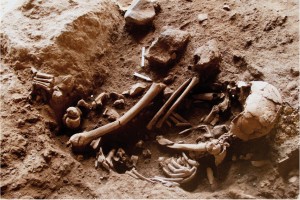 The earliest evidence of using flower beds during burials was recently discovered in Raqefet Cave on Israel’s Mount Carmel.

During excavations, led by the University of Haifa, in four of the 29 graves discovered in the cave, researchers found the impressions of Salvia plants and other species of sedges and mints visible on a thin layer of mud at the bottom of the graves.

This is another evidence that as far back as 13,700 years ago, our ancestors, the Natufians, had burial rituals similar to ours, nowadays Prof. Dani Nadel, from the University of Haifa

The Natufians, who lived some 15,000-11,500 years ago, were one of the first groups to abandon nomadic life and settle in permanent settlements. They were also among the first to establish cemeteries—confined areas where they buried their community members for generations. Congruent with this example, these cemeteries were usually located in the first chambers of caves or on terraces located below the caves.

The impressions are mostly of plants with square stems, common among the mint family, however in one incident, flowering stems of Judean Sage were found, one of three Sage species growing in the vicinity of the cave.

Curiously, there are no impressions of any stone object and bones, despite the presence of thousands of these hard and durable artifacts within the cave and grave fills. This has led the researchers to believe that the plant lining was thick and continuous, covering the entire grave floor and sides, preventing the hard objects from leaving impressions on the moist mud.