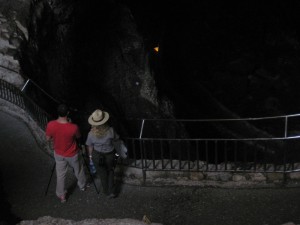 New Mexico’s Carlsbad Cavern is slated to become one of the first caves in the U.S. to be featured on Google Maps Street View later this year.

The service, which allows users to take 360-degree virtual tours of many places around the world, first went underground in February 2012 when it released images of Japan’s Akiyoshi-do Cavern.

Soon, Google Maps will do the same for Carlsbad Cavern National Park, enabling people to explore hundreds of points along the Main Corridor and Big Room tour routes.

To get the images, a Google Maps team visited Carlsbad Caverns National Park on June 17th. For each spot in the cave where images were collected, the team snapped four photos, one in each direction, which will later be stitched together to create interactive, panoramic images of the cavern.

We are anxious to see the images of the cave and for people to start exploring from home. Hopefully, this will encourage more people to come see what lies underground at Carlsbad Caverns National Park. Photos can pique your interest, but there’s nothing like seeing the real thing. John Benjamin, Carlsbad Cavern National Park Superintendent

Carlsbad Caverns was included as part of an effort to photograph national parks across the country. Could this mean that we’ll be hearing similar announcements from the likes of Mammoth, Wind, Jewel and other National Park Service caves in the near future? Let’s hope so.

The images are expected to go live on Google Maps later this year.