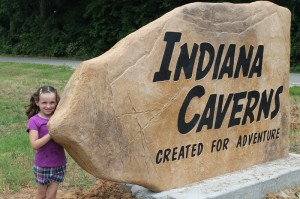 After a 380 day marathon of development, Indiana Caverns, America’s newest show cave, opened to the public this past weekend.

The journey began on May 31st, 2012 when veteran NSS cavers Gary Roberson, Terry (Dog) Crayden and Rand Heazlitt started to develop a newly discovered section of the Binkley Cave System, Indiana’s longest cave system at over 58 kilometers (36 miles) and the 11th longest cave in the United States.

Despite not completing the final finishing touches until 3:00 am on Saturday, mere hours before it was scheduled to open to the public, staff have reported that the caves first weekend went wonderfully with only minor technical difficulties.

The first visitors arrive at the cave. Photo by Carol Groves/Indiana Caverns

Going by the glowing reviews left on their Facebook page by some of the over 600 guests who visited during the first two days, all their hard work was worth it.

I’ve been to dozens of caves across the United States and Indiana Caverns has one of the best tours I have seen. William D. Brockman, Visitor