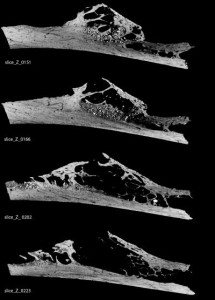 A microCT scan of the rib of a 120,000-year-old Neandertal found in a cave in present-day Croatia. Photo by GW Weber/University of Vienna, Austria

Using a u-CT scan and an X-ray, researchers identified a fibrous dysplastic neoplasm, the most common form of benign bone tumor in modern humans, on a 30 millimeter (4.5 inch) section of a young Neandertal’s left rib.

With primary bone tumors a rare occurrence in modern humans, and the previous oldest specimens dated only to 1,000 to 4,000 years old, this fossil is a unique specimen.

The tumor adds further evidence to the connection between Neandertals and modern humans.

This tumor may provide another link between Neandertals and modern peoples, links currently being reinforced with genetic and archaeological evidence. Part of our ancestry is indeed with Neandertals—we grow the same way in our bones and teeth and share the same diseases. Janet Monge, Penn Museum Associate Curator and Paleoanthropologist

First extracted from the cave in the early 1900’s, the 120,000-year-old rib of a young Neandertal was mistakenly thought to be an animal bone.

It wasn’t until 1986 that it was properly identified.

Fibrous Dysplasia in a 120,000+ Year Old Neandertal from Krapina, Croatia [PLOS ONE]