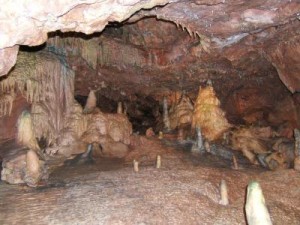 Photo by Steve B. Chamberlain

A piece of a jawbone excavated from Kent’s Cavern in southwestern England is back in the spotlight again. First discovered in 1927 during an archeological dig, the bone was first dated in 1989 and found to be approximately 35,000 years old.

Doubts were raised later about the reliability of the date due to traces of modern glue on the specimen which may have altered the results.

unfortunately the only part of the bone that remained uncontaminated was deemed too small to re-date. In order to determine the date, researchers searched through old excavation archives to find specimens of other bones found above and below the spot where the jawbone was discovered.

The bones of wolf, deer, cave bears, and woolly rhinoceroses, were radiocarbon dated with results ranging from between 50,000 and 26,000 years old. Using Bayesian statistical-modelling researchers were able to then determine that the actual age of the jawbone is between 44,000 and 41,000 years old.

The new date occurs when Neanderthals inhabited the area, so researchers had to rule out the bone actually belonging to them. They first tried using extracting DNA from one of the teeth, however there wasn’t enough to sequence. Eventually they resorted to a dental analysis of the teeth using a virtual 3D model based on a CT scan of the jawbone. They were able to match 13 of the 16 early modern human dental characteristics, confirming it as human.

This makes the jawbone the earliest direct evidence of modern humans in north-western Europe and strongly supports the theory early humans coexisted with Neanderthals.

Jawbone found in England is from the earliest known modern human in northwestern Europe [EurekAlert!]