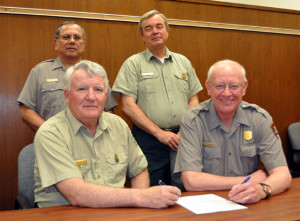 A new agreement between the Forest Service and the National Park Service will allow public land management agencies in the southern Black Hills to work closer together.

Known as a “Service First” agreement, reflecting the 2012 law which authorized these types of agreements, this arrangement allows for the first time, the Forest Service, the National Park Service, the Bureau of Land Management, and the U.S. Fish and Wildlife Service to exchange resources and share equipment across jurisdictional boundaries.

We hope this agreement improves service to the public while increasing operational efficiencies among agencies. We all share common borders and in many cases, similar issues. In this time of budget shortfalls, working together as good neighbors makes sense and benefits everyone, especially the taxpayers. Larry Johnson, Jewel Cave National Monument Superintendent

These types of agreements do not involve transferring funds, but instead the exchange of services and equipment. said Mike McNeill, Fall River District Ranger

It legally allows us to barter among ourselves to get the job done in the most efficient manner possible. If the Forest Service needs someone to assist with cave management issues at some of their caves, we have the expertise to do that. If Wind Wave needs an archeologist, this agreement allows a Forest Service archeologist to work in a national park. Larry Johnson, Jewel Cave National Monument Superintendent