Sneak Peek: Inside the June 2013 Issue of NSS News 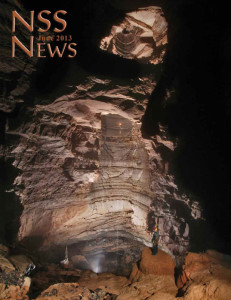 Cover of the June 2013 Issue of NSS News. Image via NSS

The June 2013 issue of NSS News has been mailed out and will soon be arriving in mailboxes.

This upcoming issue features a short summary by David S. Blehert of the results of collaborative research to determine the distribution of Geomyces destructans, the fungus that causes white-nose syndrome. That summary is immediately followed by an article by Peter Youngbaer, titled “The Rest of the Story”, which further expands on the details of the project and the involvement of the NSS.

Next up are two articles about Tennessee’s Keystone River Cave. The first, by Bill Walter, shares the story of the cave from its discovery in 1986 until the latest surveys at the end of 2012. Meanwhile in the second, Mike Rogers tells the tale of one of his most harrowing experiences when he became trapped in the cave during a trip in 1988.

Finally, Dave Hughes and Geary Schindel write about the “Luminary Series” Presentations being planned for this summer’s NSS Convention, and the NSS President, Wm Shrewsbury, answers some frequently asked questions about the new headquarters.